In 2016, we attended Camp Mustache and Chautauqua where we decided to leave our fancypants jobs and build the Mr Money Mustache App for the Mustachian community. 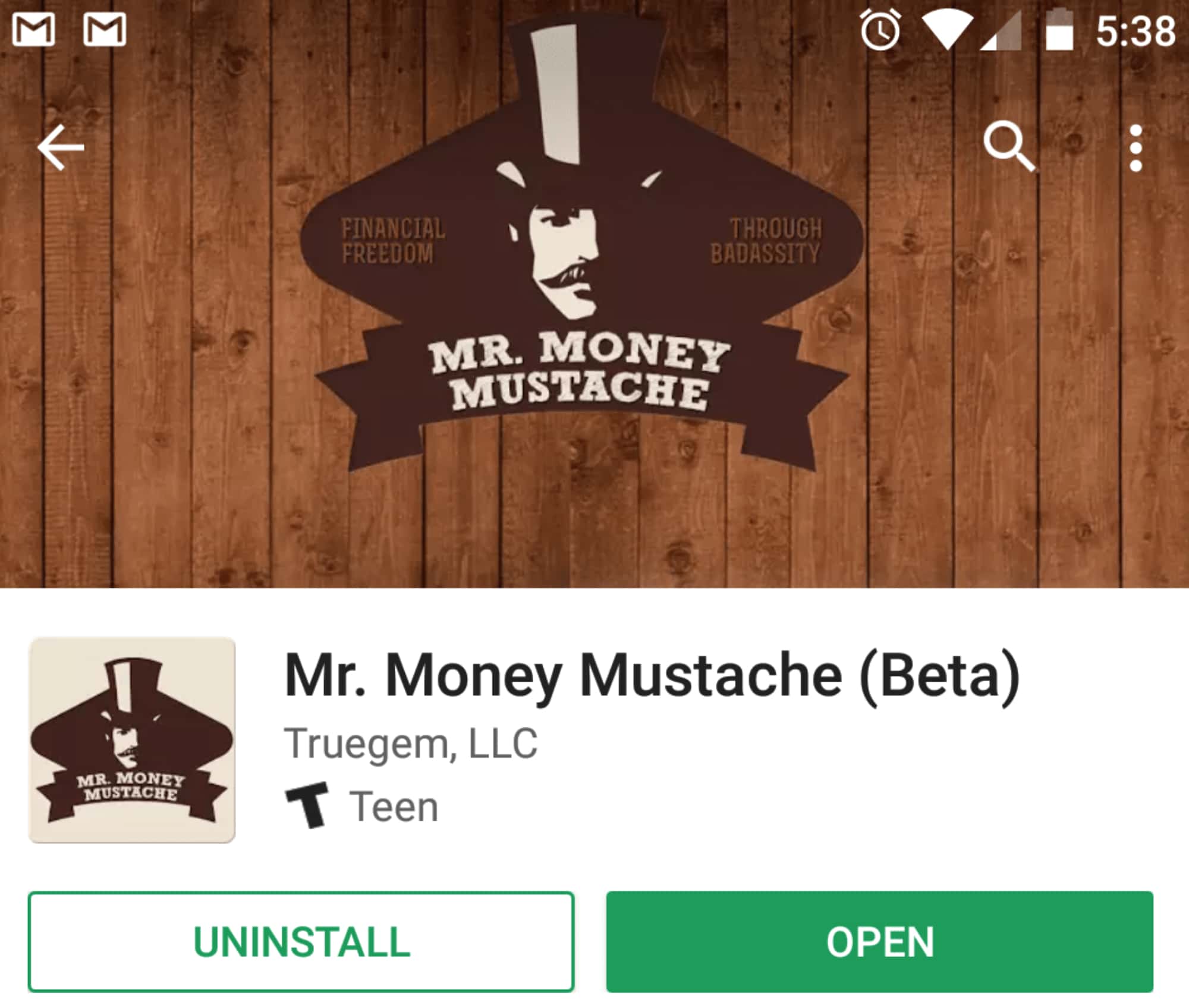 Jon and Helen met Mr. Money Mustache while attending their first Camp Mustache in Seattle, WA. Three years after discovering MMM, they had made a lot of headway in their FI journey and here they were, meeting the man himself. They introduced themselves as Mustachian devotees, a mobile developer and IT manager respectfully. They thanked him for his inspiration and exchanged FI war stories.  Sharing that they were considering a trial run for retirement, they explained that they wanted to spend a year focusing on their kids and themselves, perhaps working on some sort of project together.

It was at this point, Pete casually suggested they work on an MMM app together. They thought, “He must be joking!” and quickly moved off the subject. They parted ways without a clear obligation, and filed the encounter away as a surreal happenstance, driving home with a fun story to tell around the fire, nothing more.

After discovering Mr Money Mustache in early 2015, we embarked on a journey to refocus our lives on frugality and happiness.

As fate would have it, they all met again in Ecuador a few months later at the annual Chautauqua. During a one-on-one session with MMM, he again invited them to create an official MMM app. When they discovered that he wasn’t actually joking, the realized they should seriously consider the offer. As two people who greatly admire Pete, they saw it as an amazing opportunity. So they sat down with Pete for a good two hours to brainstorm ideas for the app and found that their goals aligned in that they all saw the app as a great opportunity to bring more people into the community and to allow people within the community to better connect with one another. In the time since Jon and Helen had discovered FIRE, they had made a strong connection with the community and wanted to give back, so building an MMM app was the perfect project for them.

In 2016 we attended Camp Mustache and Chautauqua where we decided to leave our fancypants jobs and build the Mr Money Mustache App for the Mustachian community.

Shortly after Chautauqua, they entered into their first “retirement”, both quitting their jobs. Jon and Helen began to work on building the app. They got right to it, whiteboarding layout ideas, creating a wishlist of features, learning the in’s and out’s of developing mobile applications. They found they really enjoyed working together, another benefit to finding more time to spend together through their newfound Financial Independence!

In phase one, the team focused on providing new and existing Mustachians with an intuitive and enjoyable reading experience. The main feature is the article reader, enabling users to read MMM articles offline, favorite articles, share articles with others, and enjoy push notifications when new articles are posted. Users can also log in to comment and reply on posts, participating with the community on the go. There are other fun features, like Mr. and Mrs. Money Mustaches’ comments being color coded to be found with ease. There are many more features to come, including adding a tool section for FI calculators and resources, a FI countdown feature, an ability to analyze your spending relative to the Middle Class to Kick-Ass article, and a “Measure Your Mustache” feature to name a few.

The second phase will focus on community building. They want to integrate a Mustachian Map and Mustachian Profiles for users, enabling the community to geolocate and connect with ease. They hope this will help facilitate meetups in a park, potlucks and other community activities, bringing this amazing group of people together like never before.

Mr. Money Mustache himself was the primary beta tester throughout their initial development process. He has served as a welcomed checkpoint between phases of development. The beta Android version of the app was launched just over a month ago. In the first week alone, they had over 1500 active installs for Android, mostly from the US, but about one third from other countries. Jon and Helen are hard at work updating the current version of the app and developing an IOS version. They have been sourcing feedback from the Mr. Money Mustache forum, using the beta Android version of the app.

Their goal is to keep the cost of the app as low as possible, ideally free, in order to be able to reach the largest amount of people. But building and maintaining apps is not free. The primary expense is bandwidth and server time. There are also business expenses, license and software platforms, devices to build and test the app, and basic software start up costs. They see the future costs of maintaining the the app as being anywhere from hundreds to a few thousand dollars per month. Jon and Helen are hoping to be able to break even through revenue generated by contributions and affiliate links. They are opposed to running ads on the app because they feel like it interferes with the user experience. In order to fund the costs of running the app, they will instead have a “support the app” section where you can rate the app, share it with someone, check the affiliate links, or just contribute. The money will go towards funding necessary costs in building and maintaining the app.

If you are as excited about this app as we are, you can help fund the development and maintenance of the app by visiting their website and clicking on “Support the App” where you can either choose to directly donate, or you can use their affiliate links to indirectly fund the app. After spending time with Jon & Helen, we can vouch that your support would be put to good use.

They’ve enjoyed watching the Android app user base grow and are working diligently to launch the IOS beta version in early 2018. We want to thank Jon and Helen for sharing their story with us, and taking the time to create this app for the community. Spreading the ability to achieve financial freedom through badassity is a badass endeavour. Keep up the great work!